FreshtoHome started from a hunt for a better and healthier fish in the market by Shan, Country Manager at  Zynga. He saw that the process going on in between hunting fish and bringing it to home is not hygienic. The fish loses its freshness within 30 min from its removal from water. Now, the fishermen have to bid a price for their fishes and for obvious reasons, the middlemen will bid more for the fresh one. In the whole process of bidding the price, the fishes lose its freshness and will be bid for low money. Here, the fishermen lose their money.

Now, after fixing a price, the fishes will be packed with ice and liquid ammonia and will be ready to transport. By the time it reaches its destination, fish will be affected by bacteria and chemicals. To improve the freshness, chemicals will be added to the fishes. Now, the market will be selling these chemically-treated fishes to the customers.

When Shan observed this whole thing, he decided to supply consumers not only the tasty fish but also a hygienic one. He saw an online platform called “Sea to Home” which was running under Mathew Joseph. Due to the lack of e-commerce knowledge, that was a failure. But the market for fish is extra-ordinary making India as the world’s 2nd largest fish producer and consumer with a market size of $50 billion.

This research along with the desire for fresh fish pinched him so badly that he hunted for Mathew and relaunched his business. He also included meat which changed the company name to “FreshtoHome”. Mathew connections with fishermen made the business much easier and attracted many investors to invest in it. Many employees came out from Zynga and joined with Shan by getting attracted to this idea. 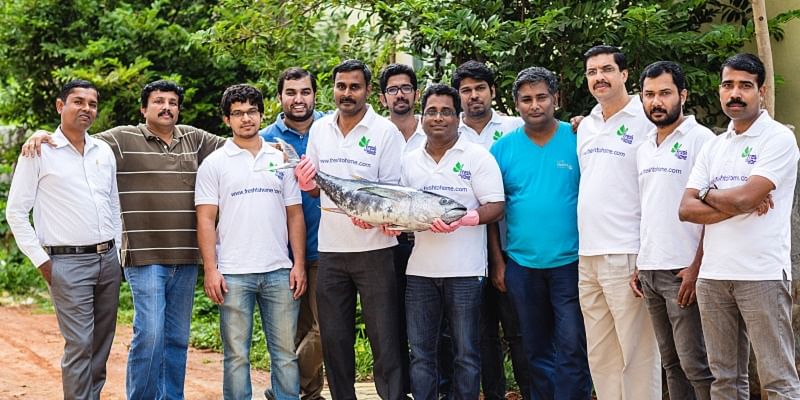 Process Followed by the company –

Now, FreshtoHome got a new team of former Zynga Employees. After various experiments of implementing the business, On Aug 2015, FreshtoHome was launched in Bangalore. Fishermen will be using an app designed by the team to bid for their fishes just like a stock market exchange. Finally, fish is covered with ice using reverse osmosis techniques which ensures to keep it cool thus making it ready to transport. Trucks reach to the point to collect the material and transport it to the nearest collecting point. They use trains for fast transport from coast to delivery points. After an order is placed, trucks will be sent across South India, all within a 100km distance. This will help them to easily collect the meat and fish from an entire area and bring it back.

FreshtoHome raised a seed investment in Jan 2016 from various investors including from Zynga, Google Ventures, ex-India Head SoftBank. They raised an amount of $11M from Crescent Enterprises and recently an amount of $20M from Iron Pillar.
Now, they are successfully running their business with over 40+ employees and generating over 200cr annual revenue. FreshtoHome is the fastest growing e- grocery companies in India. They expanded to over 8 cities and are planning to start their services in Dubai.